Hard to believe only one week ago was my last day at work, and since then we have spent more nights camping than we have at home.

What an incredible feeling.

All very justifiable questions. But after taking into account how much we have to get done before the lease ends on the 30th, we decided giving ourselves the last week and a half to get things together and run these couple practice runs was the only way to go.

annnnnd we are lucky enough to have TWO thousand trails campgrounds so close by that we figured why not take advantage of them, learn how they work, and figure out what we’re missing along the way.

So here we are!

Two thousand trails campgrounds under our belt and a BUNCH of stuff learned.

The first campground we visited was the Chesapeake Bay RV Resort, an hour north in Gloucester, VA. 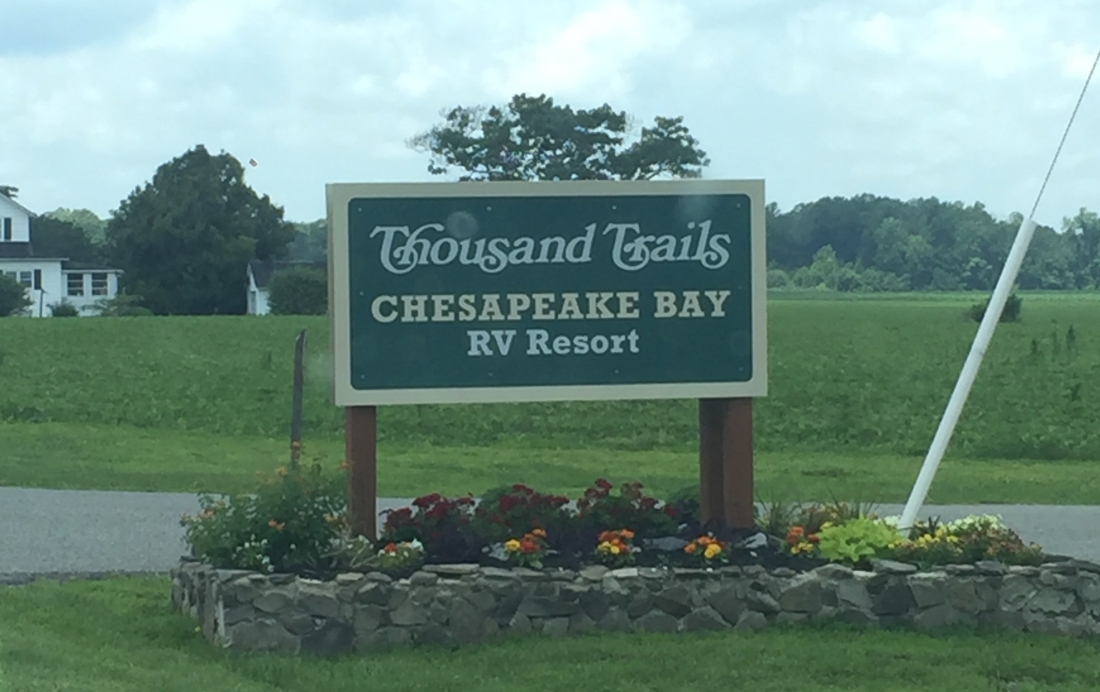 Okay, so time to get into how the Thousand Trails system works:

Each campground or resort has its own “check-in” time. Check-in is first come first serve for a site, though you are always guaranteed a spot with your reservation. Now, here’s the interesting part of the first come first serve: they just show you what’s available on the map and let you loose to pick one.

So for instance, when we pulled up to the Ranger station at the Chesapeake RV Resort, a super kind man welcomed us and showed us on the map that there were two sides to the park with availability on the outer edges of each side.

As we slowly drove through, we got more and more excited as we saw the pool, the basketball court, the pavilion, the RIVER, and soooo many people outside having a good time.

We ended up getting this AMAZING spot with a view of the water from our site. 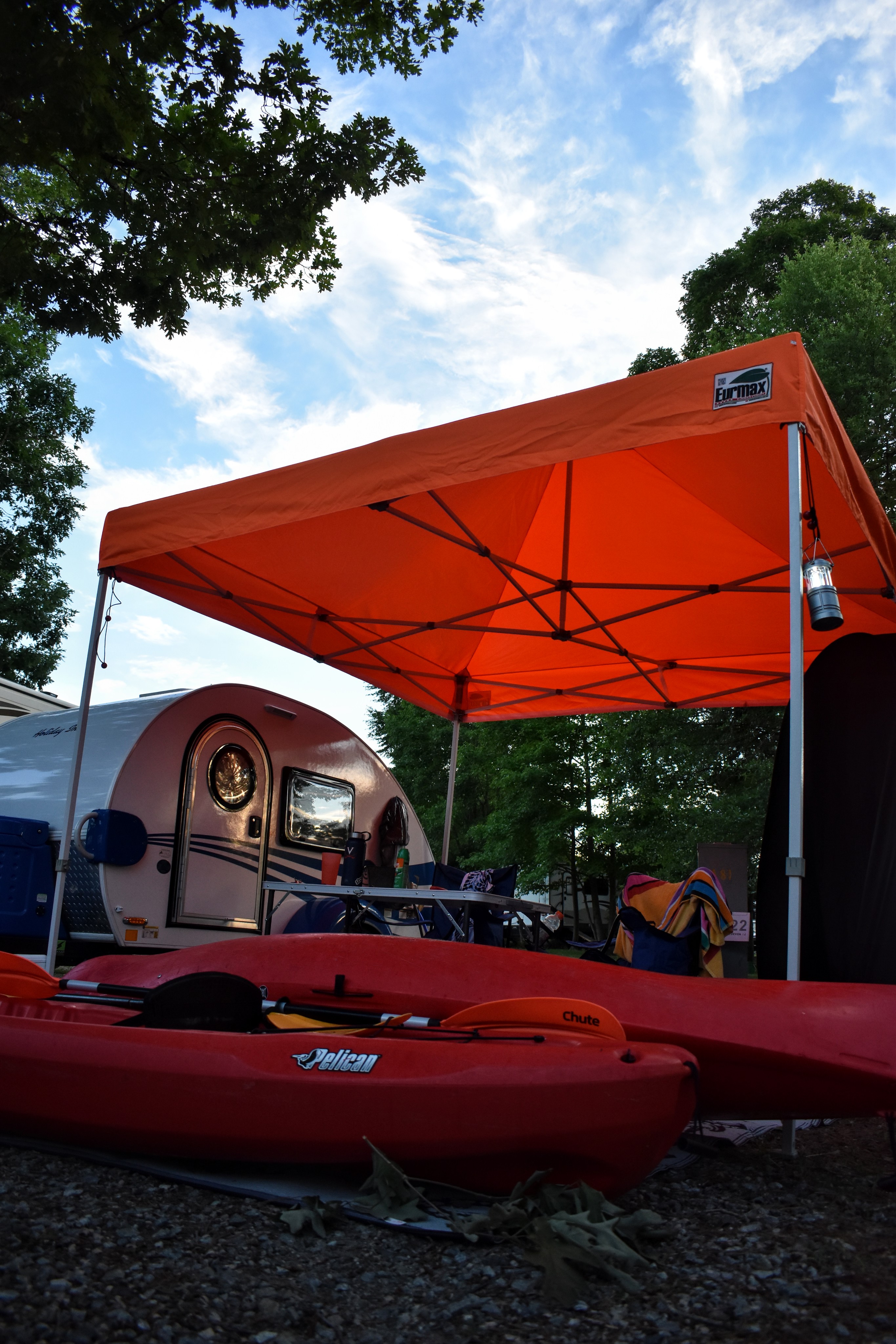 That evening we walked around the campground to get a better feel for where we were staying.

walking around, watching the sunset, drinking a beer, playing tetherball and ping pong… 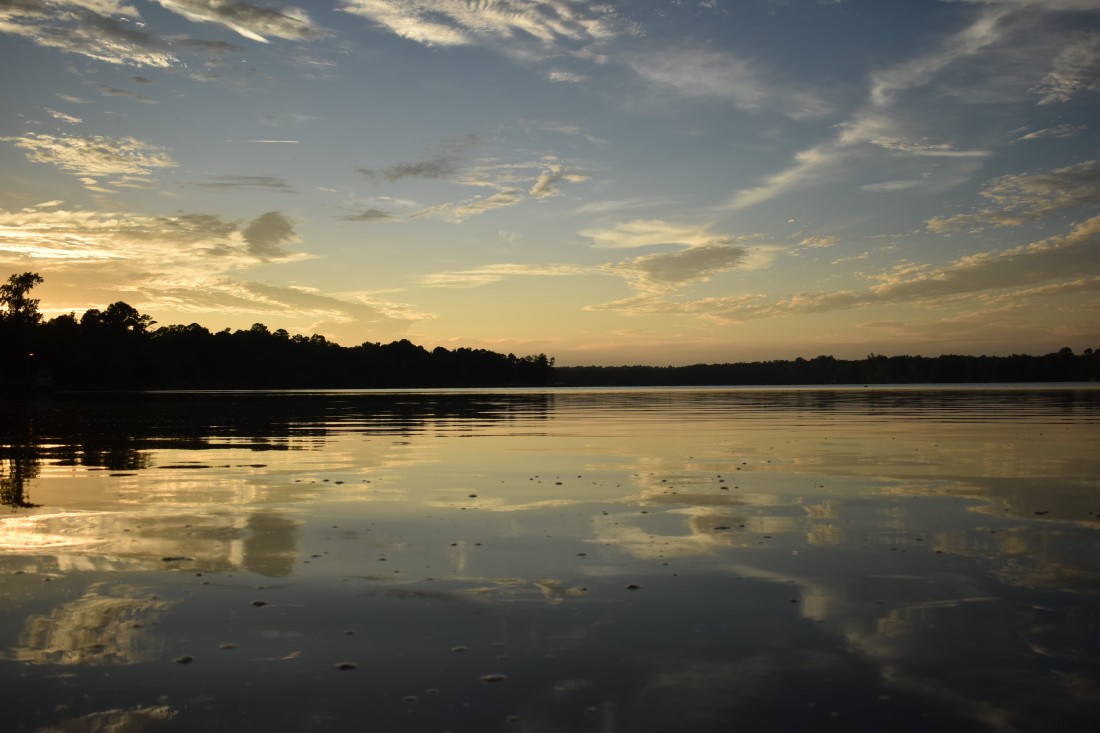 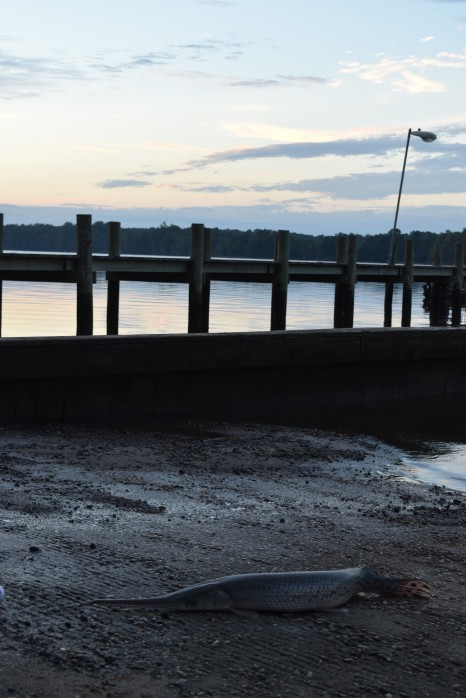 Somebody on the pier even caught a long-nose gar!

How is happiness defined again?

For dinner that night we made chicken alfredo with some grilled chicken we brought from home, noodles and regular ol alfredo sauce. Keep it simple, ya know.

The important thing to know here is that this was our first time using the gas stove!
Again, I can report that it works fantastically! However, things I learned:

Overall though, a great experience cooking.

We took the first night to unwind, relax and think about how we wanted to spend the next couple days. With the river so easily accessible and the weather relatively clear for the week, we decided to drive back to Newport News the next morning to grab the kayaks and see how those would work out. I say work out because we came home and literally put the kayak racks together…fresh out of the box. I can now gladly report they have worked out fantastically.

We got back to camp around noonish on Thursday, made a quick lunch and were out on the water within the hour

Unfortunately, no pictures from this trip out because I wanted to test the waters first and see if I felt comfortable enough taking my camera.

Nonetheless, we spent a good couple hours on the water.

Tired from being in the sun, but not quite ready to call it quits for the day, we decided to go for a drive out to Merroir, a tasting room; formerly known as the Rappahannock Oyster House, in Topping, VA. Located right on the water, this little spot was definitely one to return to. We wanted to eat light and for relatively cheap so we decided to split the Red Pepper Soup with Lump Crab ($8) and the Merroir crabcake, 100% crabmeat on asiago bread with a roummalade ($12). Y U M. We were stuffed from just those two things! 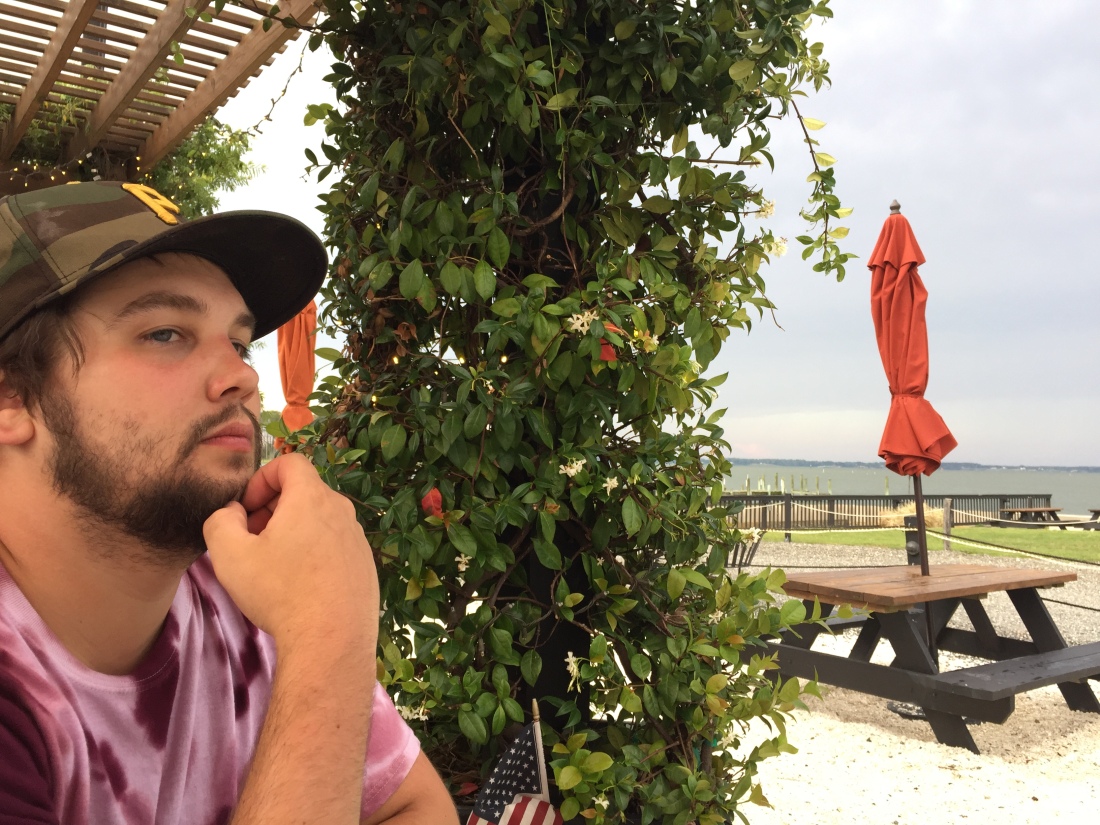 The next day, I got up relatively early and made breakfast, again, in attempts to test out the stove.

Unfortunately, i cannot report that the eggs in the pan that I cooked them worked out fantastically 😦 maybe with our new pans it will work out better, but the pans where stuff burns too them easily are NOT gonna fly any longer!

After breakfast, we made the courageous decision to go kayakaing again. I say courageous because W O W was it windy. It looked a lil choppy from a distance, and even when we first got in, it was a little…blustery. BUT WOW DID WE NOT KNOW WHAT WIND WAS UNTIL WE WERE COMIN BACK hahaha. 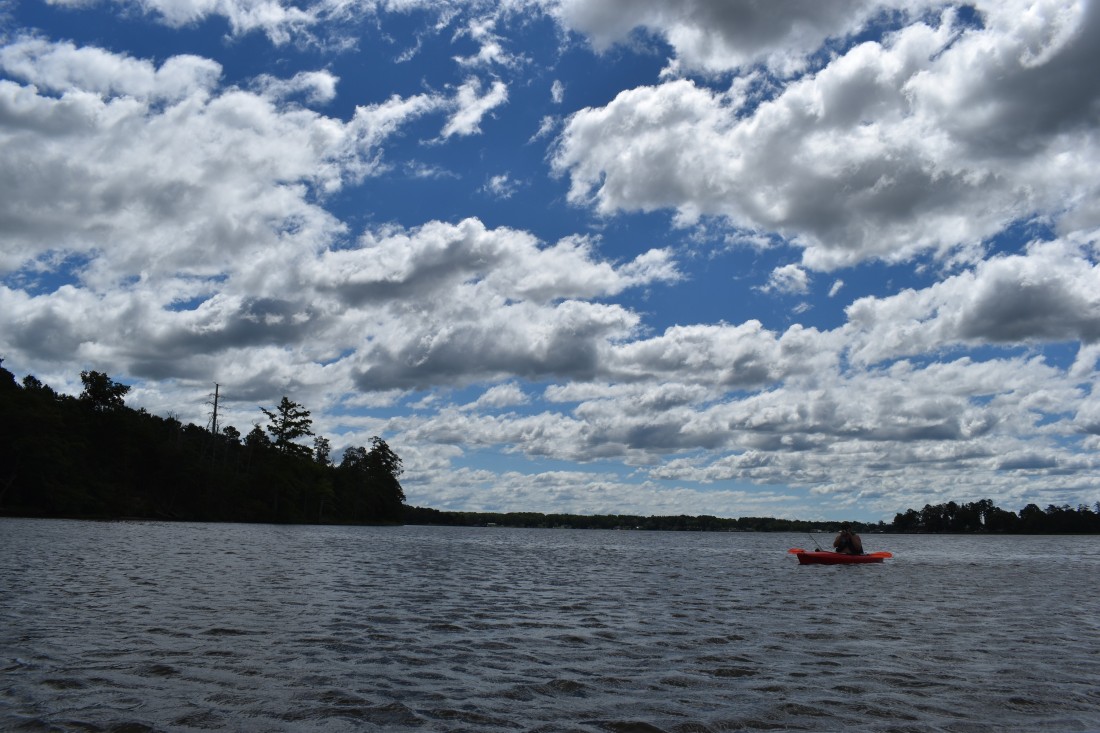 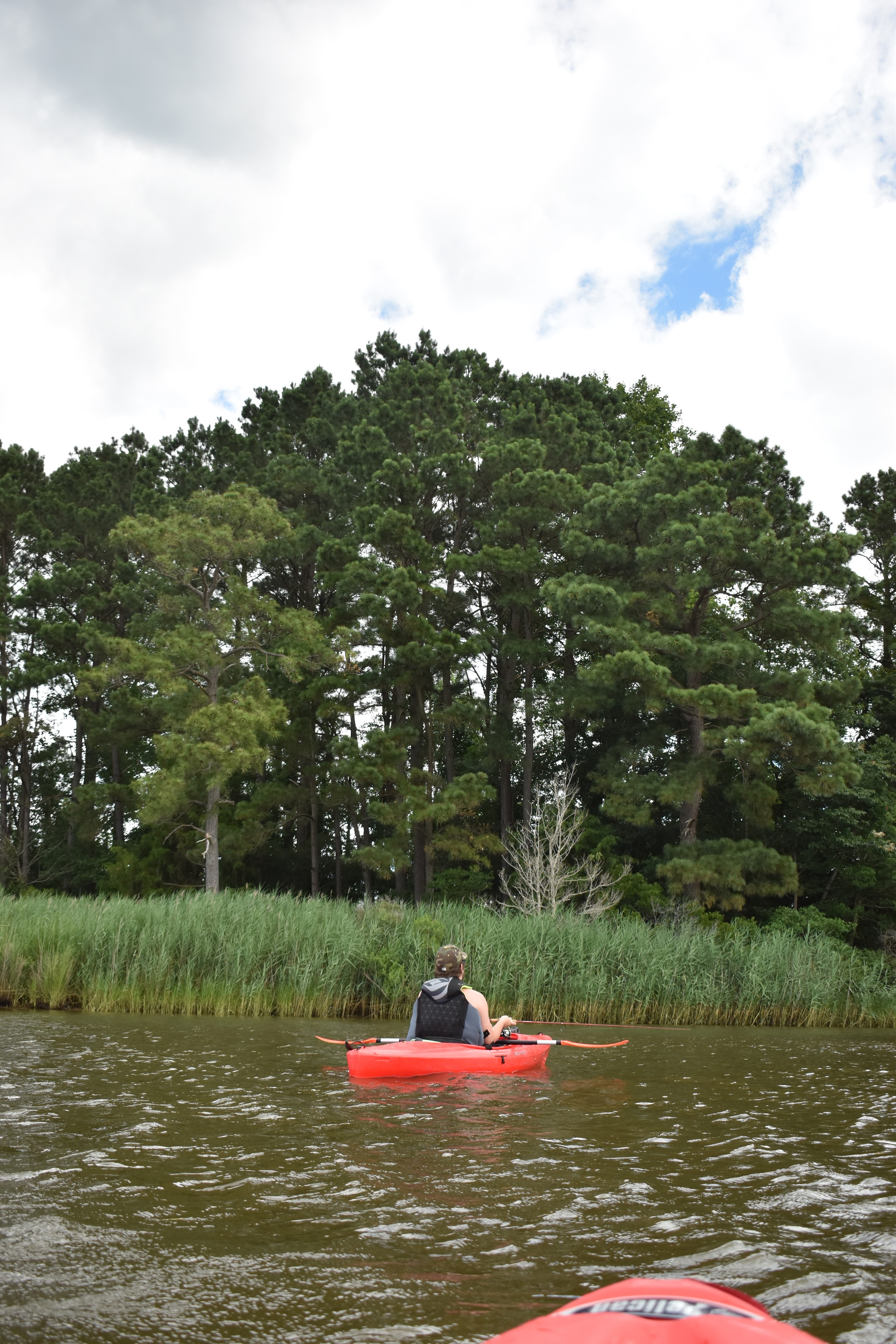 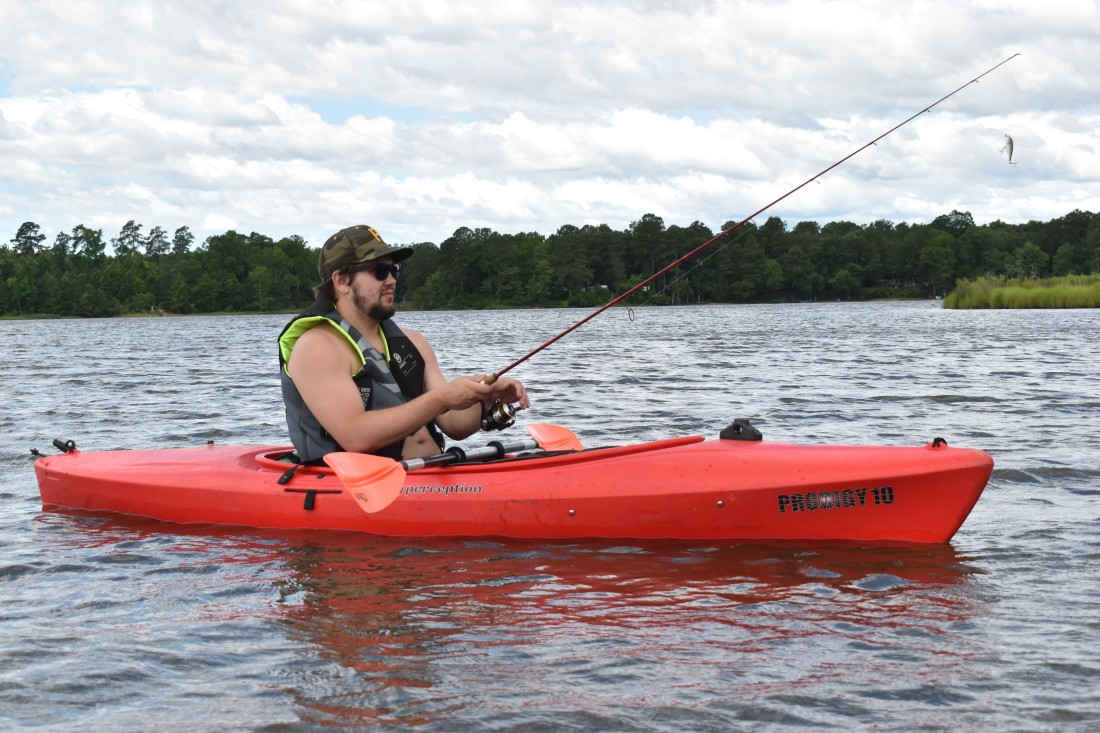 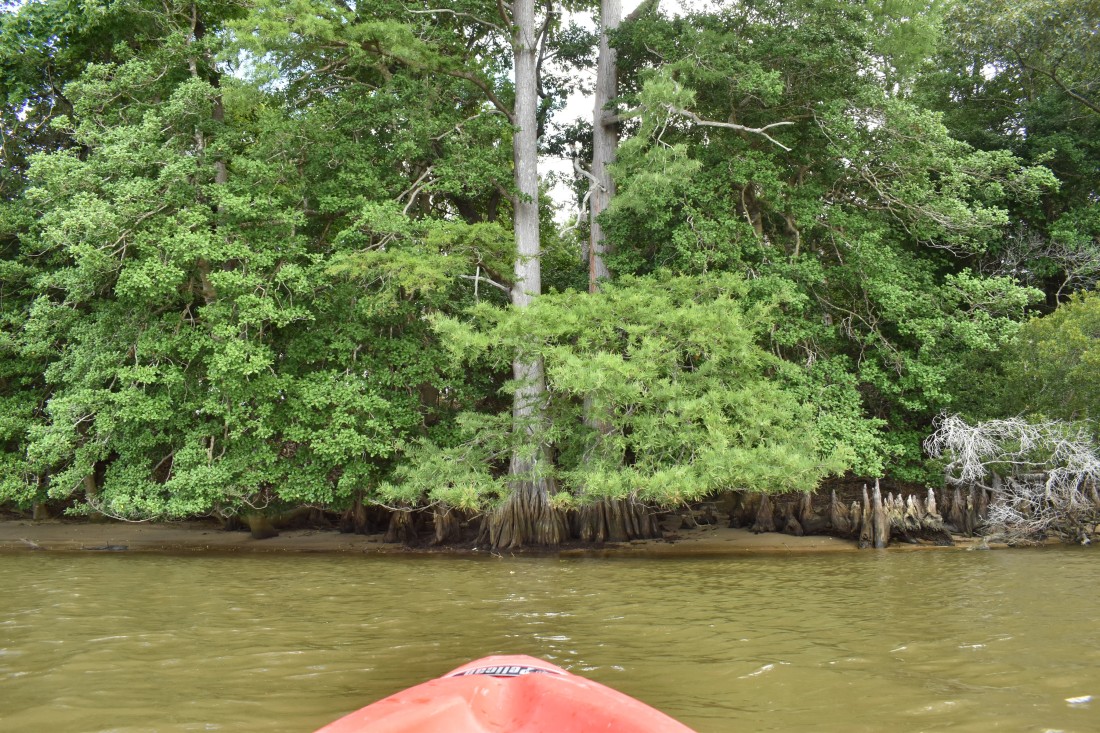 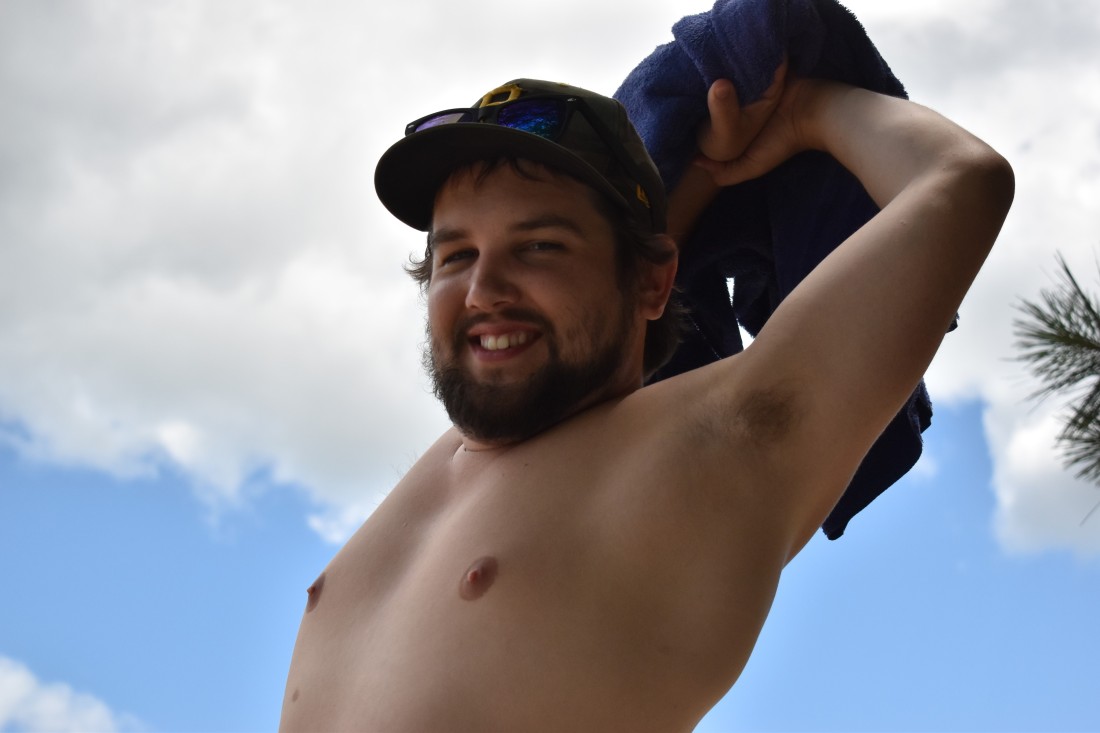 Being our last night in Gloucester, I wanted to take Devon out to a surprise location. Not anything fancy, just somewhere that was on my list of places but knew he would enjoy: New Point Comfort Lighthouse.

It took about 40 minutes to get there, with Mathews County, another spot on my list, being right in the middle.

The drive out was incredible.

The final viewpoint of the house was disappointing.

Like…if you can see the lighthouse in that picture…good on you and your eyes. 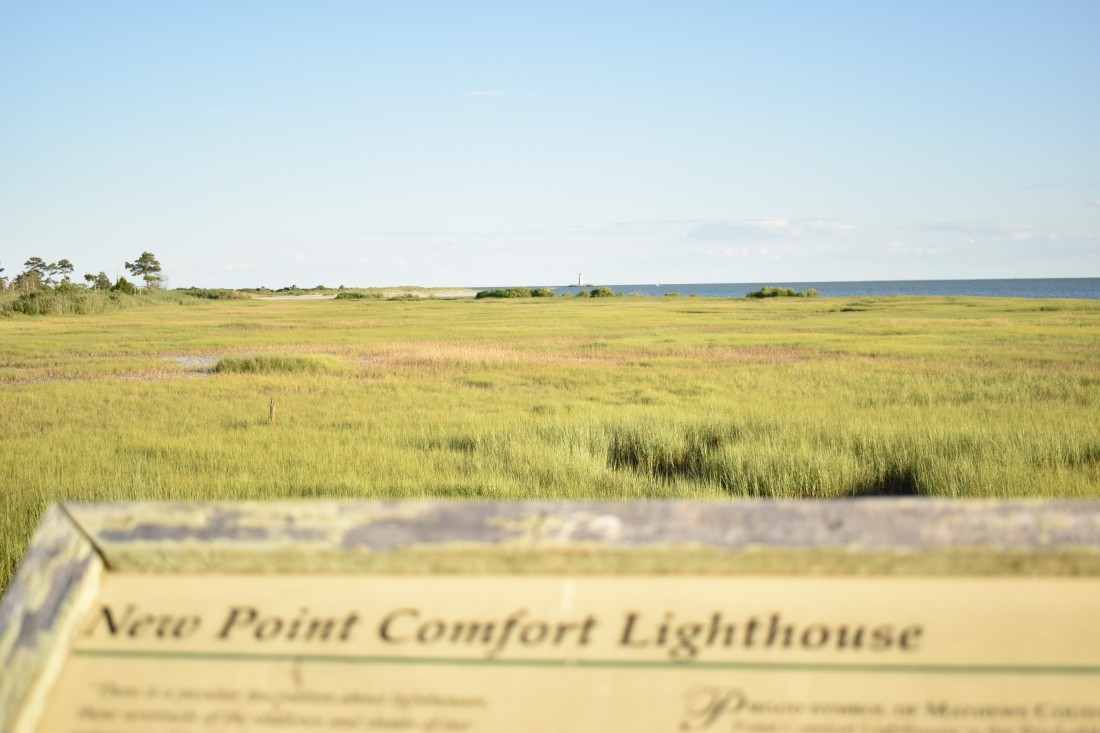 This is real. It’s really that far.

BUT. I was still very disappointed it wasn’t closer.

On our way back to camp, we stopped in Mathews for dinner at Mi Casa Azteca. Okay, so I thought PURCELLVILLE was a small town growing up. I felt like you couldn’t go much of anywhere without seeing 1 person you know, or seeing 5 cars of people you went to school with just in one drive around town.

We sat outside for dinner, right? I’m not even joking, the 5 people sitting just a few tables down from us talked to easily 5 different families/groups of people. We watched another table of people sitting next to us talk to a family that was leaving at the same time as them; a server from in the restaurant came out to talk to them; 2 servers from NEXT DOOR came out to talk to them; people GOING IN the restaurant knew them…

It was starting to get late, so we didn’t stick around much longer after grabbing a milkshake at Richardson’s cafe, YUM, and stumbling across these cool finds:

We got home that night just in time to have a fire and unwind before bed. Spending 3 days out in the sun really takes its toll on your circadian rhythm. We were heading to bed by 10pm every night and up by 7 or 8 in the morning. If you know either one of us, that’s early.

After trying for the past 2 days, I finally got up to take some pictures of the sunrise.

Like I said, for me, that’s early, so I quickly hopped back in bed. We eventually got up around 9 and were packed up and on the way back home by 11.

One thing I did think about, though, was that, soon enough, the next time we’re packing up, we’ll be heading to the next place; not headed home.

Check out our next post about our SECOND practice run in Williamsburg, VA! I had planned to write about it in this post, but ugh I talk too much, so looks like it’ll have to wait for next time.